The Quattro got some minor upgrades recently to make it road-worthy, if not fully sorted. It didn't need much, but some safety items were a bit past their expiration date.

First, though, I got it in my head that I wanted to strip and polish the original black stem back to shiny alumninum. I've always thought the black stems looked out of place on vintage Bianchis, and since I have two of them I grabbed the worst one and went to work on it. This wasn't any major heresy... the original black finish was already pretty bad on this one.

First I thought it was surely anodized aluminum and the old oven cleaner trick would surely take it off. Nope. Even the heavy-duty yellow-can oven cleaner didn't touch this stuff.

Nor did sanding. Bianchi had some excellent adhesion. 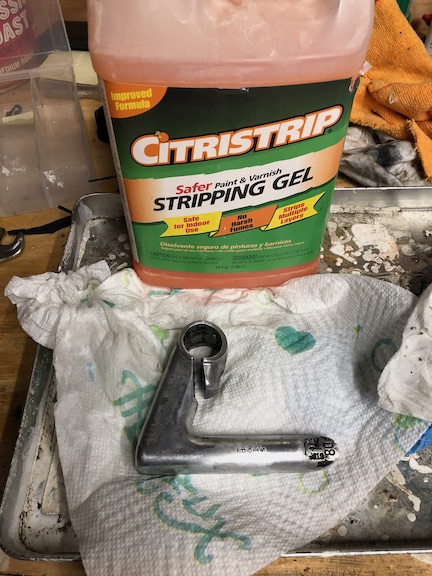 Finally, fresh out of other ideas I tried Citristrip which made short work of the paint and was surprisingly safe to both the aluminum and myself. I took the usual precautions -- gloves, etc -- and made sure I kept this stuff well away from anything it might harm, but it was really easy to use: the paint quickly gelled, while the aluminum was unharmed. Wish I'd started with it.

I guess the lesson is the same as with so many things in life: if it's that hard, you're probably doing it wrong.

And also, if it's paint you're removing, Citristrip is pretty good stuff. 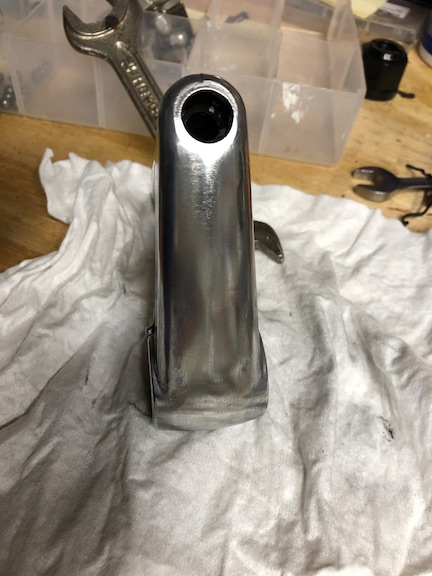 With the paint removed, I took after the with Mother's polish until my fingers cramped and the stem came up to a nice shine. Honestly, with it up next to the chromed headset I wish I'd spent a bit more time polishing and then shot it with some clearcoat, but I suspect sooner or later I'll get the chance to do that. And I do like it a lot better than when it was scuffed and discolored.

I've also learned I should probably invest in a mini bench buffer pretty soon. This stuff wears your hands out after awhile, and I like things to shine. 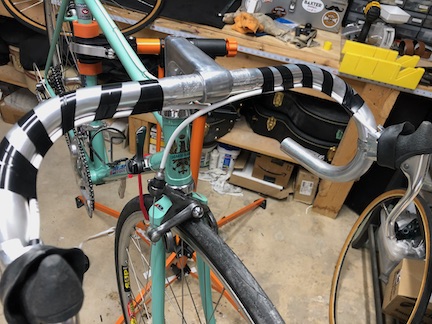 I mated the stem back to the original ITM bars, but swapped in the Shimano 105 aero brake levers that came with the Bianchi frame I picked up rather than the original Modolo levers. I still have the Modolos and may reverse the decision later -- their finish matches the rest of the Quattro groupset -- but the 105s had a nice feel, the hoods were in much better shape, and I prefer the aero look.

I used some inexpensive and unimpressive brake cables that I'll definitely have to swap out soon enough, but they do stop the bike, and I was feeling impatient to ride it. With Kool-Stops temporarily unavailable I instead picked up a knock-off version and was pleasantly surprised by them. Not bad at all. Tires were some leftover 28s I had from some bike or another. They'll be replaced soon, but good tires are so very, very hard to find right now. 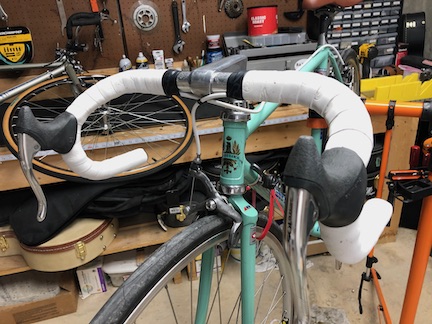 Bar tape was Cinelli cork gel which was perfectly nice, but if I'm being honest I didn't find it superior to the generic stuff I put on the Bianchi Sport. The cheaper stuff was arguably easier to work with. Heresy, I know. They both feel nice, and to Cinelli's credit the white doesn't seem to get grungy too easily. 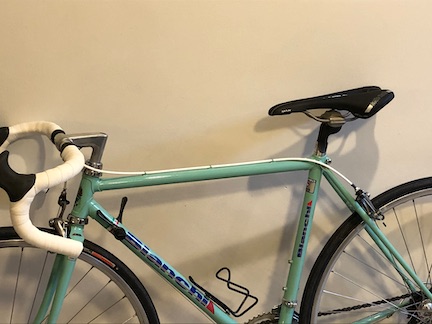 Topping it all off, I made a score on Craigslist of a perfect, like-new Selle Italia saddle. Perfect.

So what's it like to ride? It shows its racing heritage. It's fidgety. It's overgeared. It wants to do great things, if you can master it, but it feels like too much bike for most riders. It is not relaxing. It is, however, stupendously good looking. It's the sort of good-looking that distracts you while you're riding it, and this is not a good bike to get distracted on. It does not forgive your inattention.

I did some measurements and discovered that -- among other things -- the other Bianchi frame has a 2-cm longer wheelbase and a two-degree slacker seatpost. I think that geometry might work a bit better for me, so now I'm thinking I'll move everything to that frame.

See all the Bianchi Quattro posts.