The Principessa has continued to earn a spot in the stable, and over time has just seemed to impress more with each passing day. It doesn't hurt that it's such a nice looking bike, but it's also very nice to ride, especially given it's pretty humble origins. Some recent upgrades have made it even nicer. 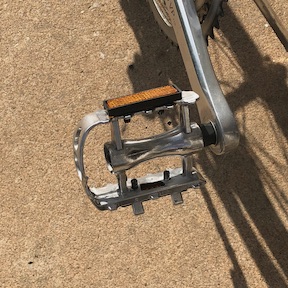 First up, some shiny aluminum pedals to replace the functional-but-dull plastic pedals I had previously installed. Unfortunately this turned out to be a regression. The plastic Zonkie pedals may not have looked like much, but they worked well. The aluminum pedals were poorly finished and out of the box they barely turned. I spent too much time polishing and lubing them only to have them fall apart in the first month. Lesson learned. So now I've got a new set on the way from another brand and I'm hoping they're not more of the same junk. I'd happily pay up for some MKS but I don't want to run such a casual bike with toeclips. 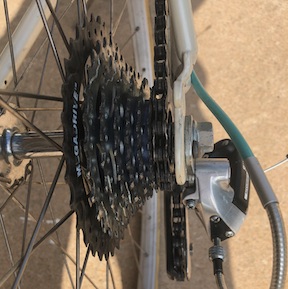 The original gearing proved to be both narrower and higher than desired, making hills a real chore. Originally the bike was fitted with a eight-speed freewheel, and I wanted to put in an wider range. I found a wide-range eight-speed freewheel that would bolt right up to the hub with about 5mm of spacers and repositioning the axle a smidge, but that produced a new problem: The dropout spacing is too narrow.

Luckily these old steel frames can be cold set -- don't try this with an aluminum or carbon frame -- so I made a simple spreader from threaded rod, bolts and washers and carefully stretched the frame a bit. Problem solved!

The old-style stem-mounted shifters were also a problem. They're just not as convenient and easy-to-use as modern trigger shifters, and even worse, they kept getting bumped when going up hills. The upgrade, however, proved to be a bit tricky. First, the bike now had a relatively unusual 2x8 gearset, which most folks don't make as a shifter set. Second, like so many parts, a lot of shifters are on the forever-backlog unavailable list. In the end, I managed to get my hands on a suitable Shimano shifter for the left side, but I couldn't locate a matching 8-speed shifter for the right side. I could, however, get some cheapo Chinese shifters that get the job done. It's not ideal, but it works. 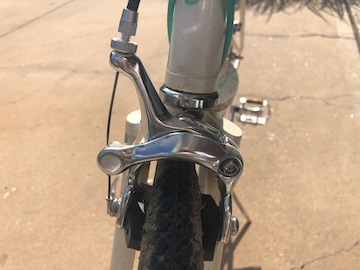 If you look in the pic with the shifters you can also catch a glimpse the very nice Tektro brake levers I installed to replace the old Dia-Compe ones. The Tektros still have a nice vintage look, but have a much better feel than the old Dia-Compes, with a lot less "slop" in the lever. At the other end I picked up some unbranded-but-probably-Tektro sidepulls on eBay that also proved to be a nice upgrade. I should have cleaned the bike before snapping the pic, though.

It was already a good city cruiser, but with those upgrades it really became a charmer. We may have to keep this one for awhile. 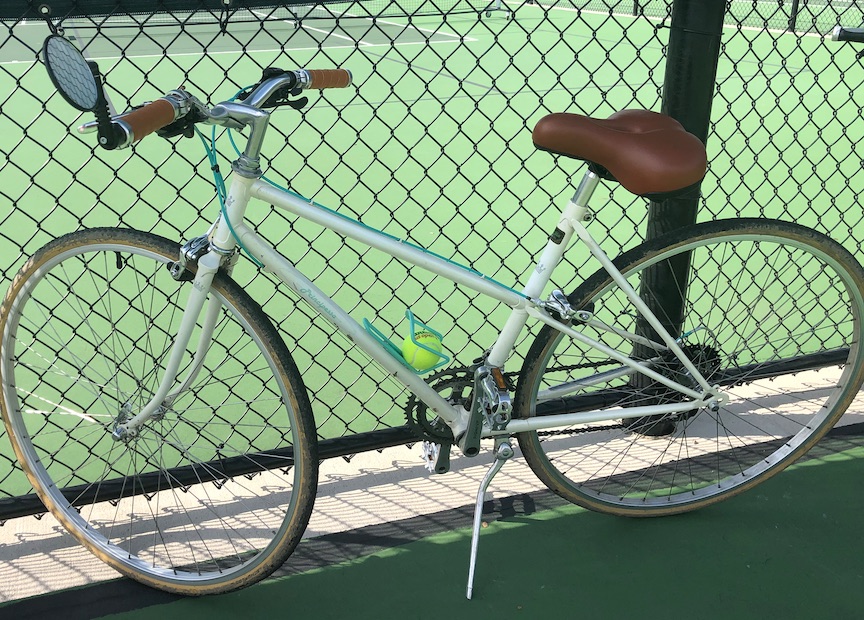 See all the KHS Aerosport posts.