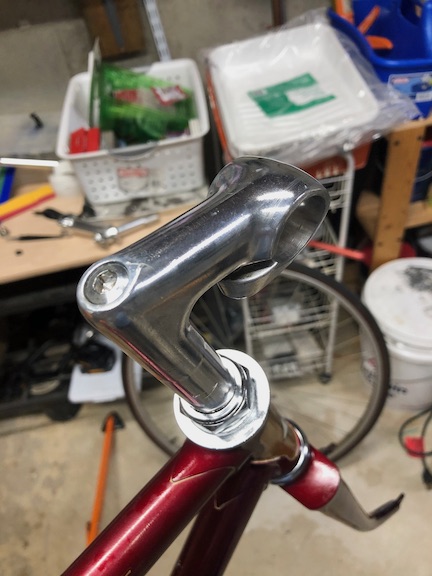 For the most part, the rebuild of the Nishiki was quick and straightforward. Assembly, as they say, is the reverse of disassembly. It didn't hurt that for the most part I found the original Nishiki parts to be pretty serviceable and even surprisingly good.

For example, the original Sakae Ringyo stem has nice lines and polished up beatifully. It also had a nice reach and lift for the planned upright bgar conversion.

As mentioned in the teardown the headset -- like most of the bearings -- showed few signs of wear. It had a thick film of heat-induced grime/varnishing, but again, Mother's polish had it looking like new in no time. 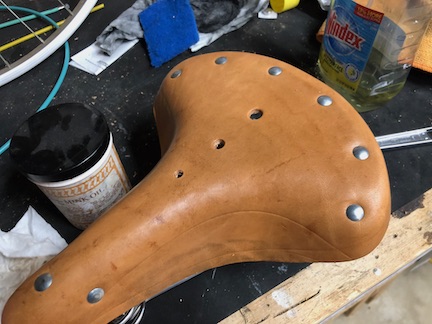 Wanting a retro-style seat, I took a chance on a cowhide sprung seat that clearly wants to remind you of a Brooks. It's not. For $35, it's not even close to Brooks quality. But it is very, very comfortable and seems pretty well-made for less than a 50. Just forgive a few flaws in the leather grain, and be sure to treat thoroughly with some leather preservative. I used mink oil. While it's definitely no Brooks, I'm pretty impressed with the seat quality and comfort of this seat. It makes me want to pony up for the real thing. 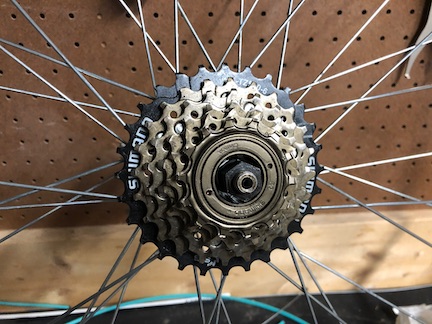 Running gear changes were pretty minimal. The stock stuff was mostly decent quality and serviceable, so I just kept it. The wheels, for example, came from the factory with Malliard hubs laced up to some broad-shouldered Araya rims. Not the lightest combo, but not the heaviest,either. They're definitely a good base for the Vittoria Zaffiro which are broad, tough, easy rolling and easy on the wallet -- Perfect for a little grocery-getter like this.

I did throw a new Shimano gear cluster on it as I rebuilt and regreased the wheels. The original SunTour unit was still in good shape, but I had the Shimano unit in hand already and it's a bit lighter, so might as well. A new KMC chain was fitted, too. 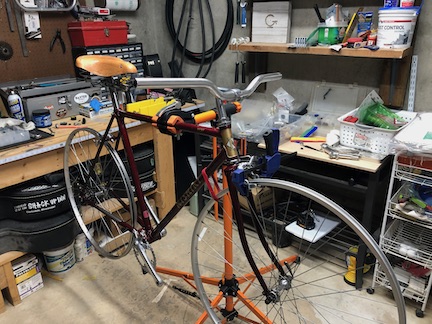 I had planned on putting a set of Origin8 Pro Rise bars on the Nishiki since they worked out so nicely on the Principessa. Unfortunately, when I test fitted them something felt off. They just didn't look right. I never could quite put my finger on why, but on the Principessa they worked really well and on this one ... not so much. So I went back to the drawing board and tried out a set of Velo Orange Tourist bars (aka "North Road bars"). 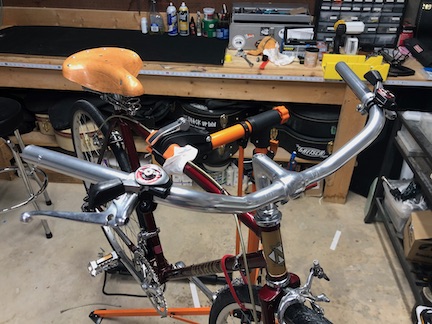 Even then I couldn't leave well enough alone. The North Road bars definitely looked better and seemed more comfortable (mostly) but I didn't like how far they came back. Knowing that if I cut them with a hacksaw I'd never be happy with my results I picked up an inexpensive pipe cutter and took two inches off each side. Much better, and I wish I'd bought a pipe cutter for this sort of work years ago. That said, if I ever need to buy another I'll get something with more handle so I can have a bit more leverage. Still, handy tool to have.

For the brakes I used some vintage Dia-Compe levers from the parts bin. They may get replaced with Tektros down the road, but they're fine for now.

Shifting is handled by some inexpensive SunRace friction shifters which look to me to be clones of older SunTour designs.

Both brake and shifter cables use some nice braided gold housing I found on ebay. I was really happy with the quality of this stuff. Nice stiffness and low friction. It's nice when you buy for looks but the quality exceeds expectations.

Other than that handful of new parts, the rest of the rebuild was the usual: Clean. Polish. Remove rust. Clean some more. Put in new grease. Adjust. Maybe I'll have a whole post of before and after shots of grungy components cleaned up. Or maybe not.

Either way, next time: finishing touches for the Nishiki

See all the Nishiki Sport posts.