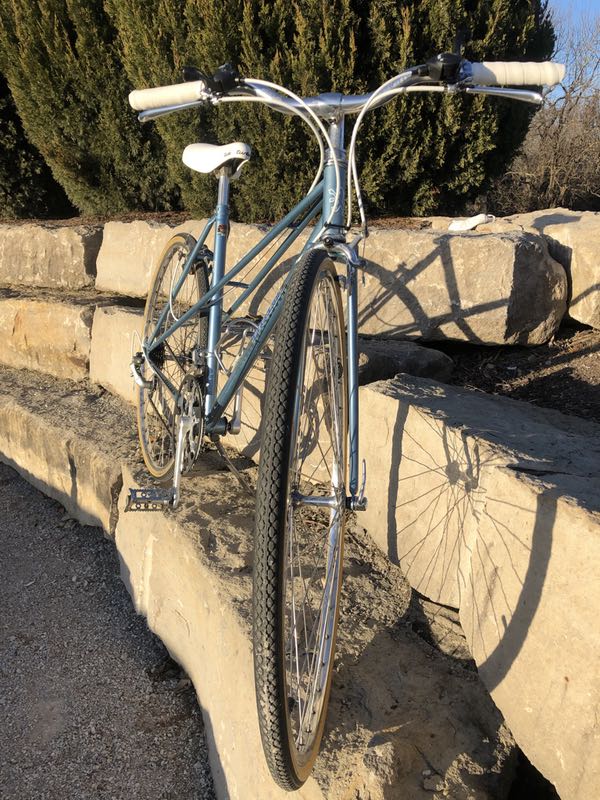 Life intervened on documenting the Peugeot renovation, so I'm a bit behind on my little blogging adventure here. I'll try to make it up with pictures.

As mentioned previously, corrosion on the Peugeot frame forced me into giving it a full respray. As I waited on the new decals to make their way across the pond from bicyclestickers.co.uk, I started work on all the components.

I could tell the bike had been truly loved once. That had been awhile ago, though, and things were looking rough. It took a lot of time, effort and polishing compound, but it really came out nice.

It's not perfect by any stretch, but it has a nice blend of shiny new and vintage patina, and it positively oozes Gallic charm. It's the kind of bike that makes you want to buy more just like it, even though you clearly already have one and don't need more.

But that's the finished product. It took a lot to get there, as you can see in the before-and-after photos.

Let's start with the rust. As noted previously, the rust on the frame wasn't deep, but it was extensive. Worse yet, the more I stripped back, the more rust I uncovered.

In the end, the automotive paint cost considerably more than the bike had, but it was worth it. The frame finished up very well, and the reproduction decals completed the look beautifully -- so much so that I picked white accents, including brake lines, to complement the white Peugeot logos. 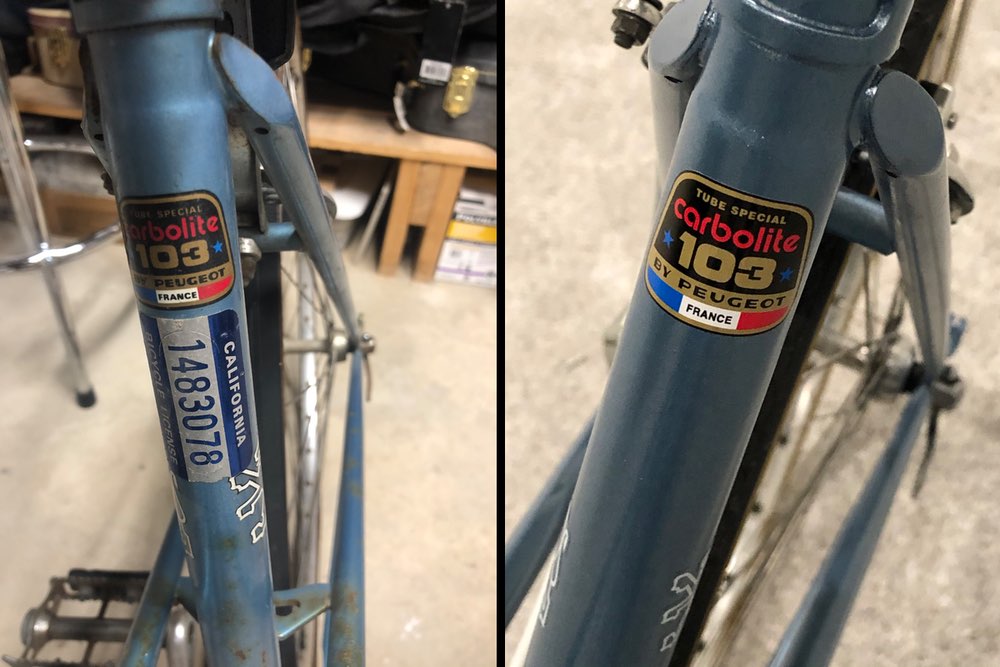 The PH19 and the closely related (and more common) PH10 were built from Peugeot's proprietary Carbolite 103 high-tensile steel. That should be a recipe for real pig of a bike, but the French apparently can work some magic with gas pipe. The PH19 isn't particularly heavy and it rides lighter than it is. Normally I would be a hard pass on most high-tensile steel bikes. I'm glad I gave it a chance.

The permit stickers tell us that at some point, long ago, this was a California bike before it found its way to the midwest and began a long period of neglect.

You can also see that the bicyclestickers.co.uk reproductions aren't a perfect match, but I don't think anyone is likely to be cork-sniffing a Carbolite bike for vintage authenticity. They look good, and mostly correct, and that's good enough for me.

If the bike had rusted from the inside-out then the frame would be junk. I think the California salt air attacked the paint, but not deeply.

The steel bottom bracket was similarly corroded, but only on the surface. It cleaned up well, as did the original Stronglight cranks. I added a new Greenfield kick stand since it's just a kickstand sort of bike.

Speaking of the Stronglight cranks, they were one of the few bits that really just had some surface grime on them, so they cleaned up with very little effort. I did, however, have to pick up new chainring bolts since the originals were pretty far gone.

The cranks and chainrings were just quickly dismantled and hit with a bit of Mother's polish and they came out wonderfully. The alloy rings look like they've seen very few miles. Even the black plastic chainguard cleaned up well and was reused.

The front derailleur is Peugeot branded but probably made by Simplex. The Peugeot sticker is a little yellowed, but that's just seems like a bit of patina.

The derailleur itself polished right up and works well. The old chain was a goner, though, so a new KMC silver-finished chain is in place now. 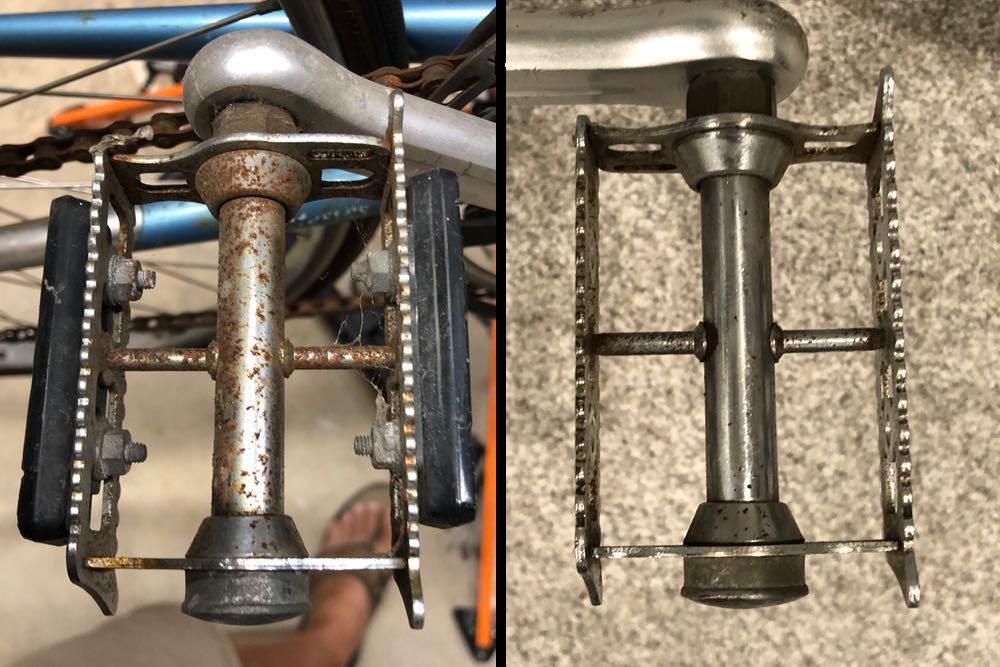 The pedals looked absolutely terrible but they spun freely, had no end-play, and were fairly lightweight. They clearly must have been decent quality when new, and comparable new pedals would be out of the budget for this bike, if I could even find them. So I tried cleaning them up, with fair results.

They're far from perfect, but they don't look bad and they still work very well. Of course I went ahead and repacked them with grease. Since pedals tend to get pretty abused, I chose some higher-quality Finish Line grease.

For polishing the pedals and other tight areas where my stubby fingers don't really fit, I picked up a new rotary tool with a flexible shaft extension and it's been one of my smarter recent tool purchases. It's so much easier than trying to polish everything by hand, and this particular rotary tool has impressed me more than several more expensive ones I've had in the past. 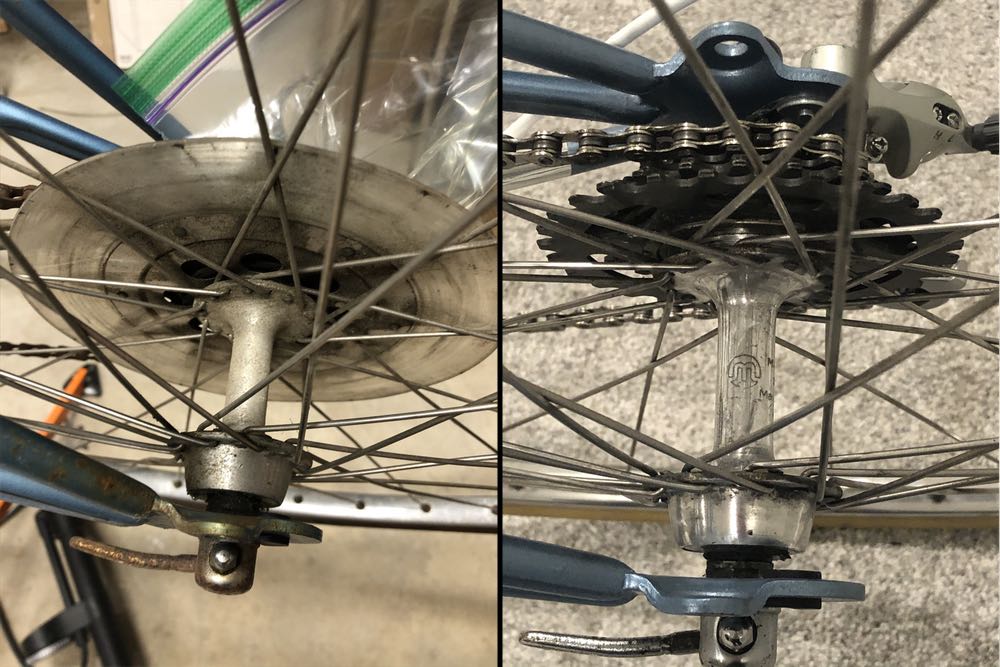 It made a huge difference on the hubs and rims. Trying to polish around spokes isn't fun, but the flexible shaft made it go much better.

The Peugeot had Malliard hubs mated to Rigida rims, with Speidel quick-releases. All decent enough, but they were in terrible shape, with a cruddy gray haze everywhere that wasn't covered in oily grime.

The quick releases in particular were pretty rusty. A hard scrubbing with light oil and blue Scotch-brite pads took the rust off, and then they cleaned up well.

Of course I had to buy yet another freewheel tool to remove the Atom cluster for cleaning, and to remove the ugly yellowed plastic pie plate. 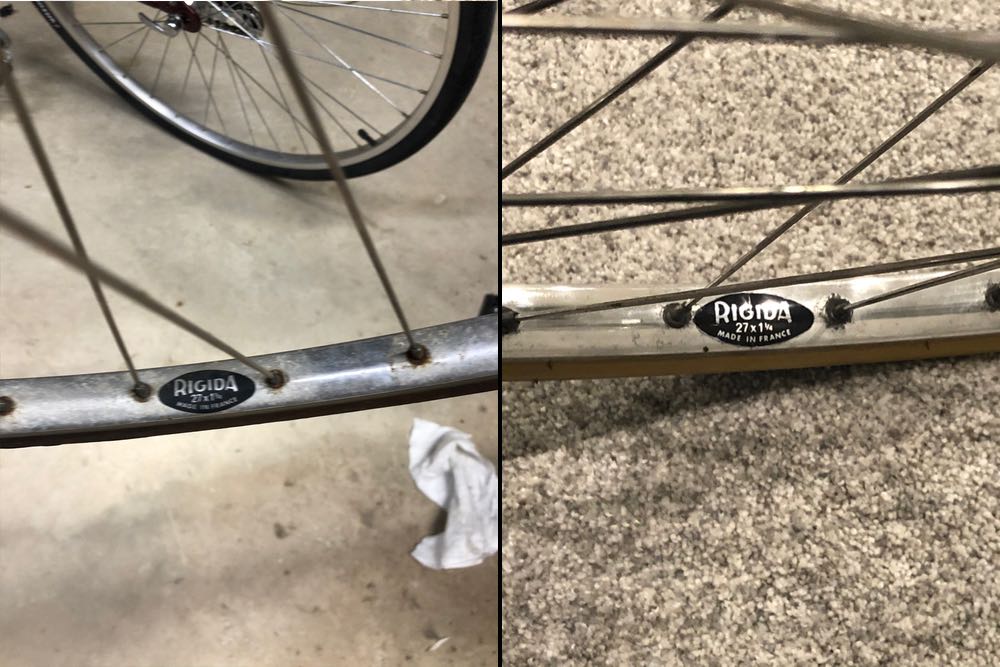 The rims were a complete surprise. As I got the grime off I could see that they had a chrome-ish finish. At first I thought -- and fretted -- that they were steel rims.

I was completely surprised to discover that they're definitely aluminum but had apparently originally been highly polished. I was just bringing the shine back to them. Regardless, they look great now.

Tires are Schwalbe HS159 with gum walls, because I had them in the parts bin already and they're 27". If I had to buy tires I would have picked Panaracer Paselas in 27", but the Schwalbes are fine and durable.

The original chrome sticker chain stay was looking ragged, so I picked up a Peugeot-branded one from eBay.

I mistakenly thought it would be hard chromed plastic, not a thin vinyl sticker, but it works. I also really like the white cables against the metallic French blue paint. 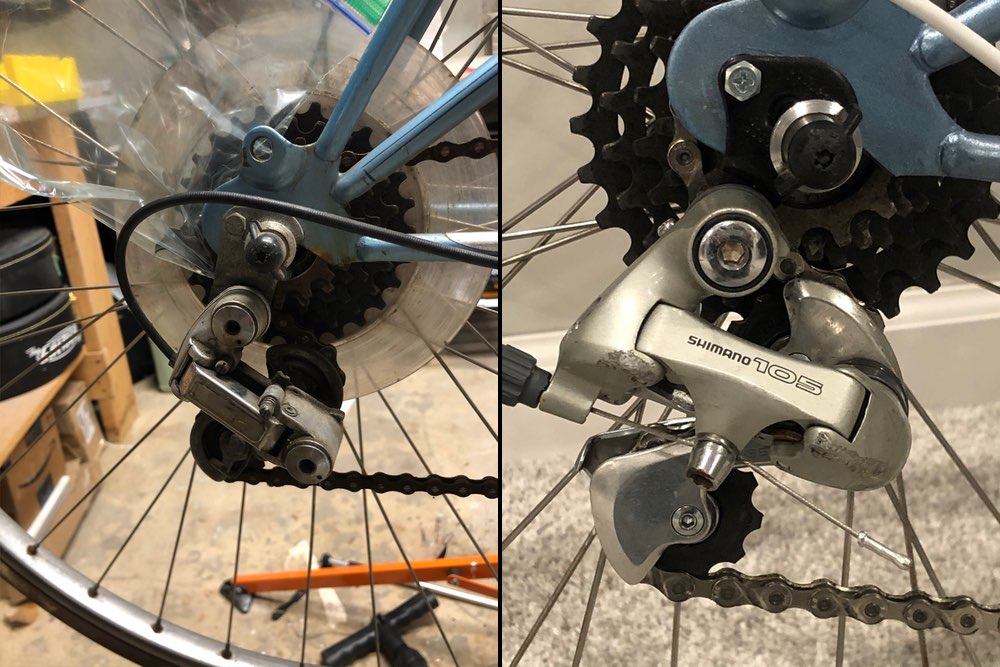 The rear derailleur was an adventure. These old Simplex derailleurs have a reputation for brittle pulley wheels, and my pulley wheel came to me in pieces inside a plastic bag helfully taped to the spokes.

Of course Simplex pulleys are complete unobtainium and the Shimano pulleys I already had laying around don't fit.

After doing some research I learned Suntour pulleys can fit. I thought it would be simple enough to find a ragged Suntour derailleur to scavenge a pulley from, but then I couldn't find one for a reasonable price.

In the end, it was faster/cheaper/easier to just get a different derailleur, and I found a nice Shimano 105 on eBay for a good price. Then I still had to buy a new hanger because the original was made for the Simplex, which of course uses a different size bolt.

I'm happy with the results. The 105 doesn't look too out of place to my eyes and it shifts fantastically. 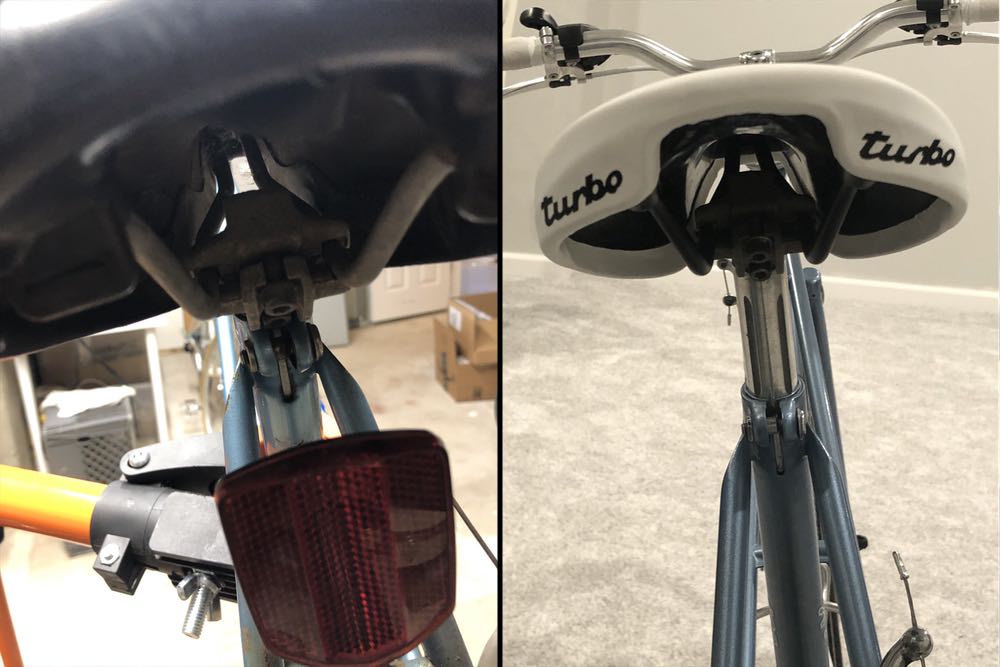 Taking a look from the rear, the finished Peugeot shows little touches that weren't readily visible, like a nicely fluted seatpost that polished up well.

Even the seat post bolt was pretty nasty, but it came back surprisingly well. Scrubby pads, light oil and elbow grease make magic.

A brand-new vintage-style Selle Italia saddle in white (of course) makes a lovely and comfortable topper for all of it. Over the seat you can catch a glimpse of the new cockpit, too. 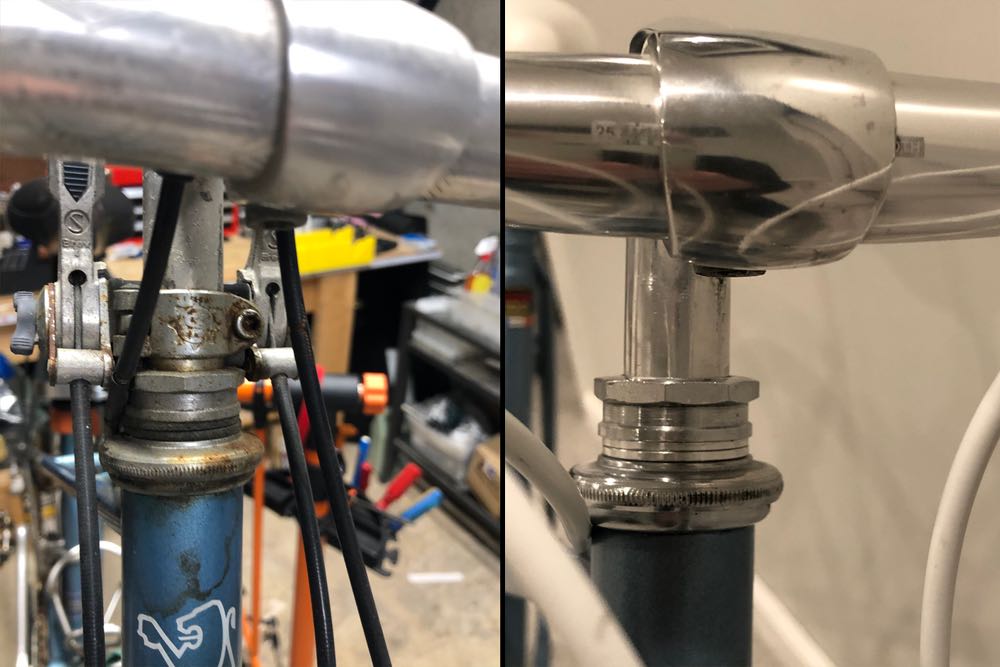 Taking a closer look at the cockpit, about all the stayed was the original stem and the headset.

The headset needed some light rust removal but the races looked good, so no problems there. The headset spacers had darkened with age, but polished aluminum replacements fixed that.

The original stem took a fine shine, but the stem-mounted shifters went into the parts bin, along with the bars and brake levers, all to make way for converting the original drop-bar configuration to upright bars. 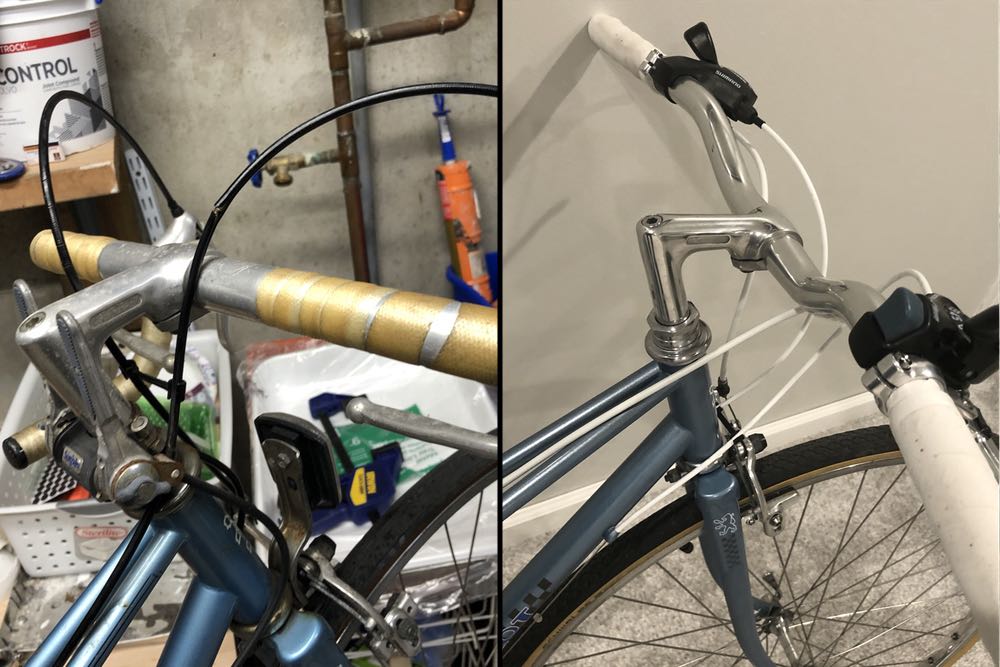 The original-looking celo bar tape went into the trash -- what was left of it, anyway. In their place I fitted Origin8 bars and Tektro FL750 brake levers, same as on the Principessa.

Shifting duties are handled by some Shimano Tourney units, which work shockingly well for the price: $20 for both sides! They work perfectly with the original 2x12 gearing setup, and even have a little blue upshift button that complements the blue paint. I was really surprised at how nice these admittedly bargain-basement shifters turned out.

Grips are simply SRAM cork bar tape in white. I was going to lacquer them but in the end didn't bother. Even clear lacquer would have yellowed them some, and honestly, if they get that dirty, I can just re-wrap them. One box of bar tape would wrap them 2-4 times.

Bar plugs are courtesy of Kendall-Jackson. More on that in an upcoming post.

So how does it ride? Wonderfully. It's a beautiful little ride. It's very comfortable, with quick but not flighty handling. The mixte frame looks fantastic, it's easy to get on and off and it's very flingable -- but again, not squirrelly.

It feels like you could ride it all day but you'd have to stop frequently to just enjoy the day with it.

It may have been a surprisingly great bike back in the day, or maybe it's way more than the sum of its parts. Either way, I love this thing. It is, in every sense, a lovely bike. I'm glad it didn't go to the dumpster.