I believe bikes tell you what they want to be. And after three months with the Nishiki, it was clear that while it looked the part of an updated classic sports tourer, it wasn't really happy playing the part.

It didn't want to be a grocery getter. That much was clear. It wanted to be... something else. The question was: what?

The biggest problem was that the Nishiki fought back against the classic North Road bars all the time. What should have been the most comfortable bars around just never worked. It clearly wanted to my hands farther forward.

It didn't want to be a relaxed sports tourer. It wants your hands low and forward. It wants to be a café racer.

So I decided to change tack. Off came the North Road bars. Let's lean into this "café racer" idea.

So, to that end, in place of some perfectly nice Velo Orange Tourist bars I decided to take the original drop bars and cut them down with my tubing cutter to get a nice clean cut and make my own bullhorn bars.

I spent a lot of time thinking about braking options for the bullhorns. At first I wondered if I had something in the parts bin that would work, either for upright or drop bars. But nothing really felt right. Finally, I decided I wanted the levers out at the ends of the horns, which means I really needed some reverse levers. 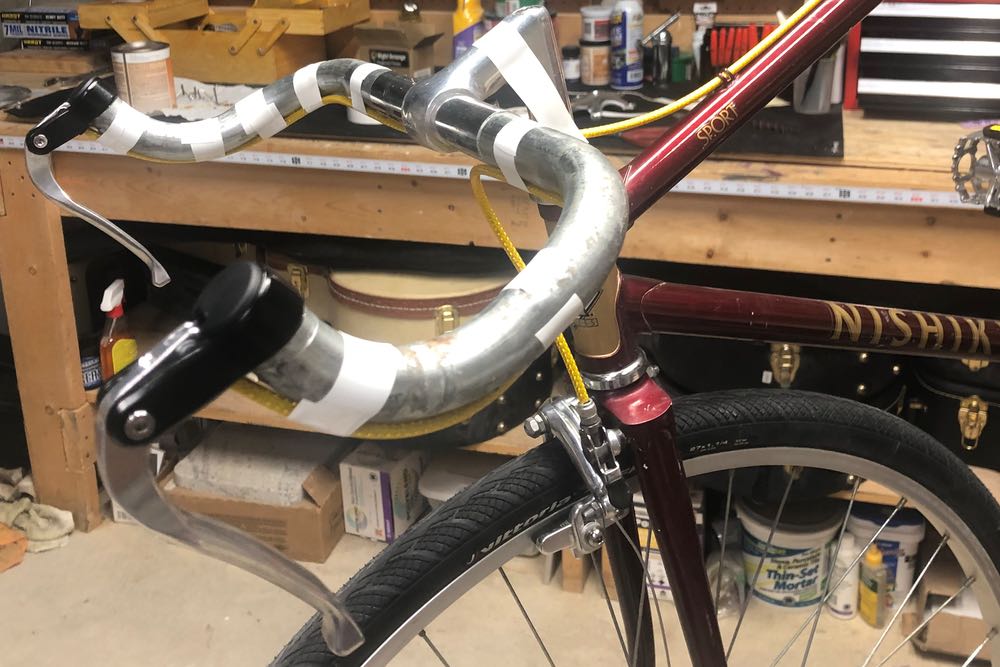 Now, if I had any good sense I'd have picked up some reputable reverse levers, like these Tektros. But I've never been plagued by good sense, so I decided to take a chance on some ridiculously cheap and poorly rated knock-off levers.

In retrospect, the Tektros weren't really much more money, but whatever. I was in it for the spirit of experimentation!

So my cheap, one-star-rated levers arrived, with "Cansucc" laser-engraved on the handles. This did not really foster confidence.

And yet... they were fine. Yeah, at 80 grams they could be lighter. But they're fine. They feel good, they stop well, what else do you want? Especially for a low-buck café racer build?

I had to pick up new braided cable, which I wasn't too happy about. The old stuff was better looking, but it was just a smidge too short to reach the new bullhorn reversed mounting.

So... cut the bars down and install the new reverse levers -- but what about shifting? Oh... about that. I also decided that the café racer theme was clearly leading me to making it a single speed. Let's strip it down to the bare essentials, right?

So I yanked the Wald front basket off, along with both derailleurs, the thumb shifters, cables and anything else I didn't absolutely have to have. Then I fitted a simple single speed freewheel. Lean and clean. 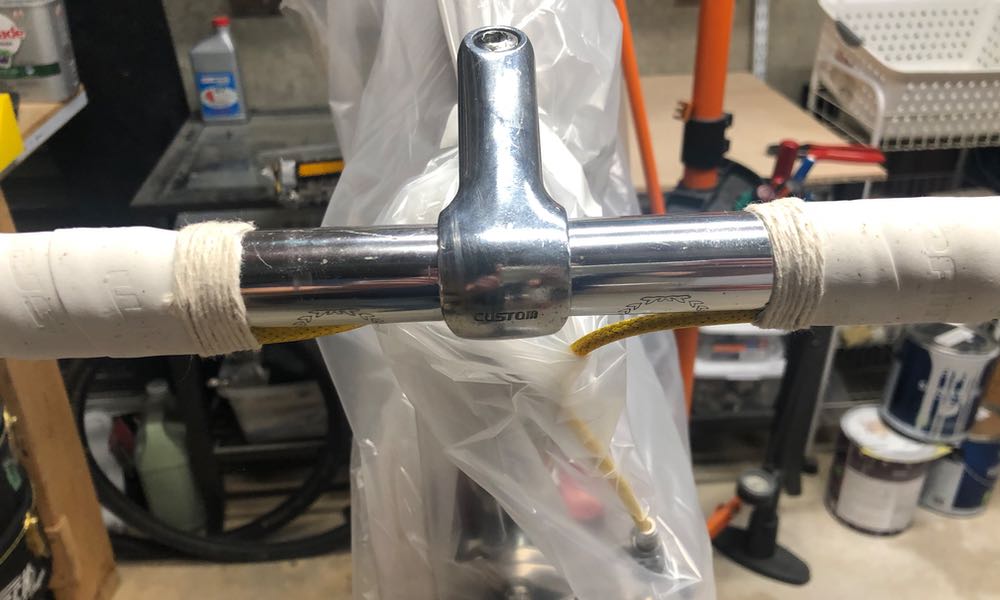 With the stripped down drivetrain in place, I returned to the bars, wrapping them with SRAM Supercork tape, with twine finishing the tape off.

As a side note, the longer I have that twine around the workshop, the more I find useful things to do with it.

I knew I wanted to shellac the grip again, so I wrapped everything in plastic to prepare, since shellac tends to splatter and drip. 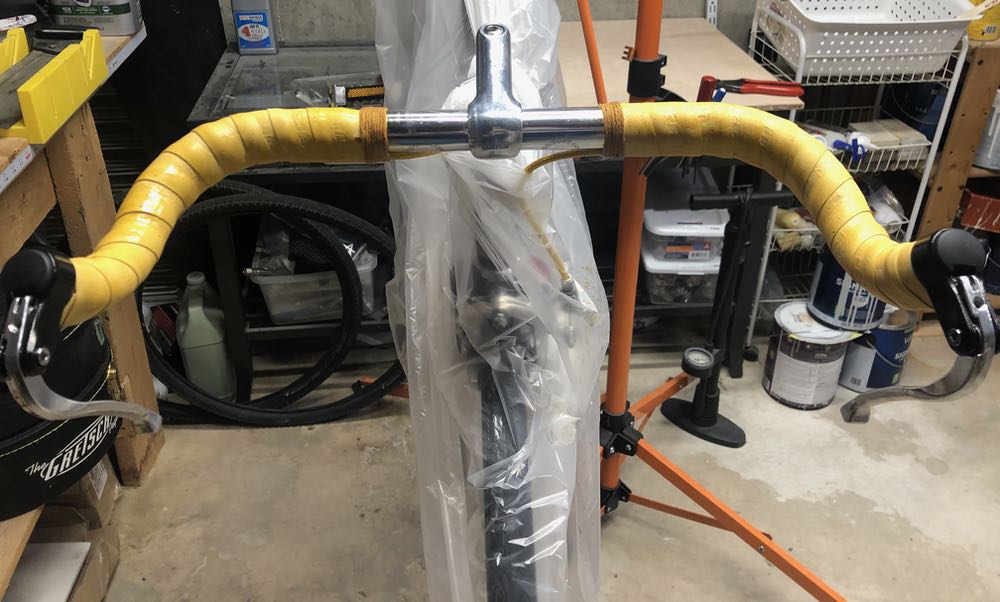 Two light coats of Zinnser amber shellac gave the warm honey look I was going for. It's important to do light coats of shellac, or it will be likely to crack. Better to take the time, put on light coats, and have it look better longer.

The pic here was taken after the first coat. The color was already nice, but I knew it would be richer after the second coat. And it's more weather and sweat-resistant, too. 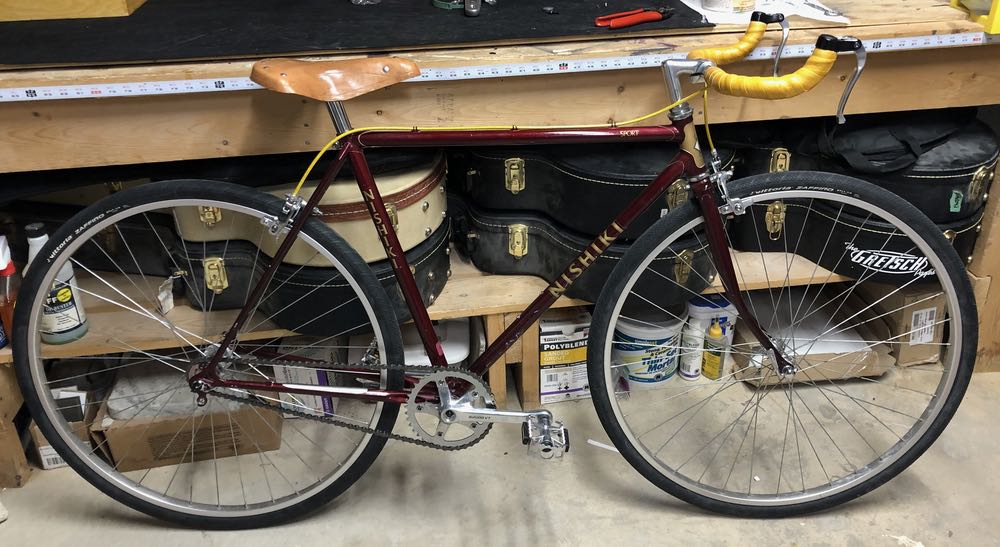 That had it nearly done, and I was able to stand back and admire the handiwork. I like the new look quite a bit. I wish the cheap leather seat matched better, but it could be worse. I may swap it, if I can decide on what might be better. 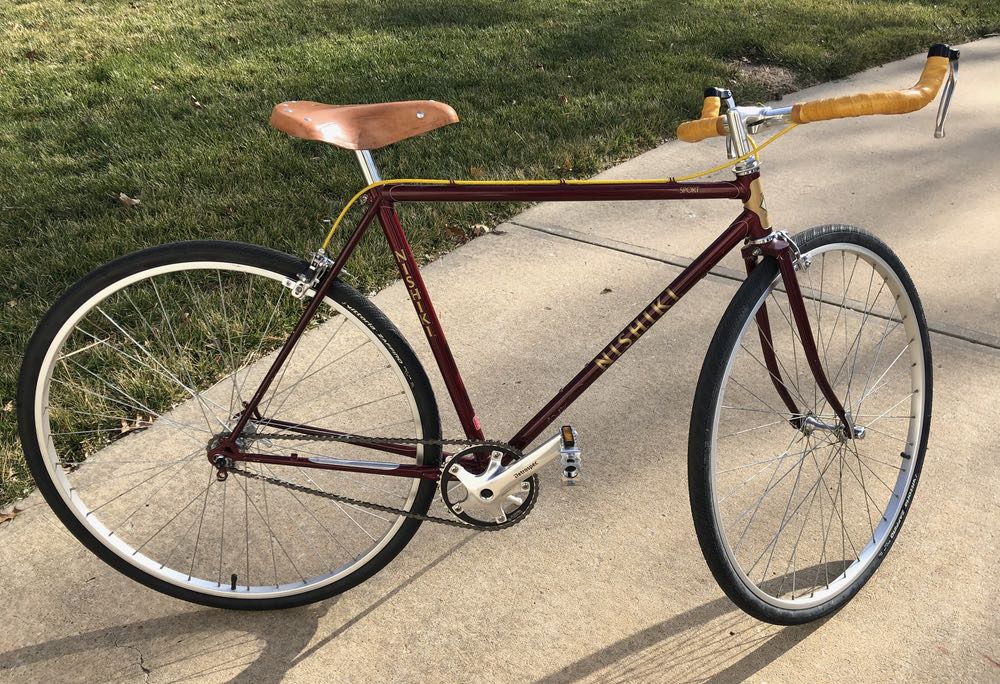 After riding it a bit, I did make one last-minute change, putting on a set of Retrospec cranks and a 42-tooth non-ramped chainring in place of the Sugino originals. Honestly, the Sugino stuff is probably better, but the Retrospec cranks have been rattling around for too long and I was itching to put them on something.

See all the Nishiki Sport posts.