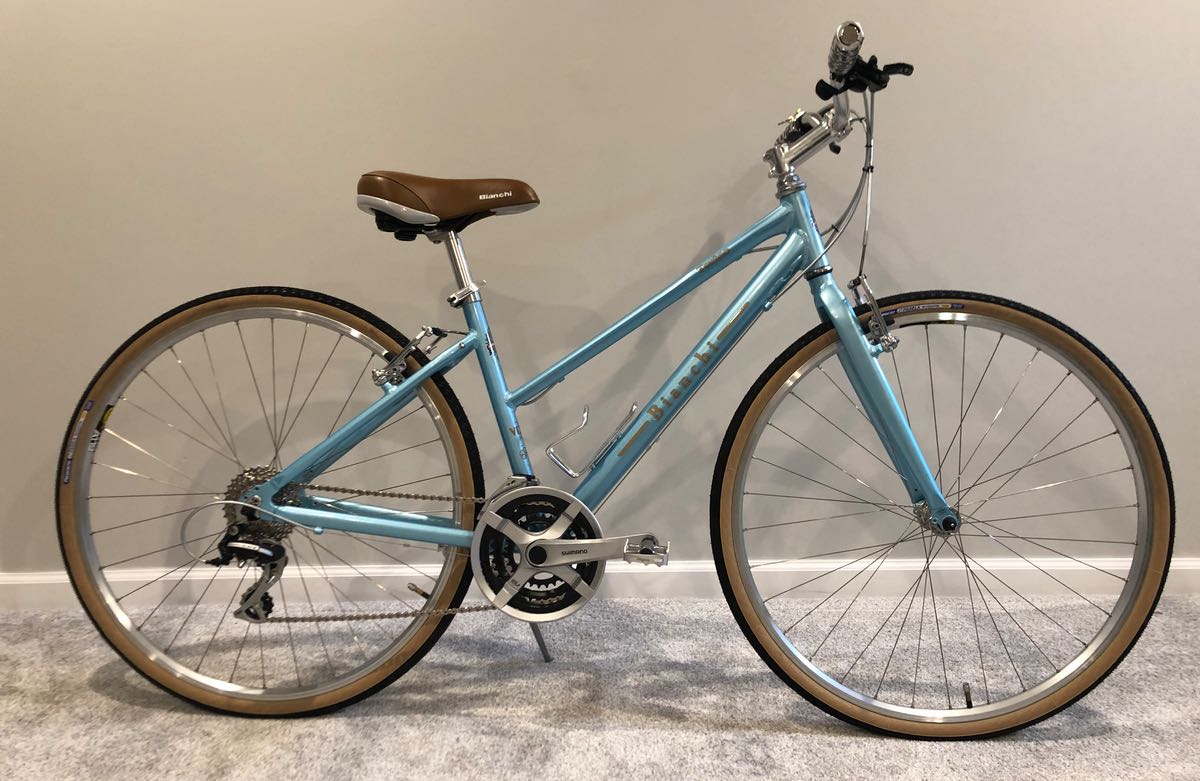 I've mentioned before that a Bianchi Torino Dama was indirectly responsible for this site. Well, it took eight months to make it happen, but we finally got our hands on one.

In the end we stumbled onto one on eBay. Given that Bianchi appears completely unable to meet demand anytime soon, we jumped. Truth be told, we thought we had managed to get a new one back in December, but when we opened the box it was the wrong size and banana yellow. When you find the right one, you jump.

So this one came our way. Right sized, and in an nice color Bianchi calls aquamarine.

Unfortunately, in transit the derailleur hanger had been crushed. I can't really complain, though. Overall the bike was packed well, and a new hanger was a cheap fix.

Of course, we couldn't leave well enough alone, either. In short order a whole mess of parts had been ordered and were making their way onto the Torino.

First, up we had a nice wheel upgrade from Bicycle Wheel Warehouse. We picked some Mavic rims with Claris hubs. Nothing high-end, but they're strong enough for any sort of light mixed trail riding we'll be doing and much lighter than the stock rims. Plus, their silver rather than black, which visually lightened things up a lot, too. They're wrapped in Panaracer Pasela tires in a fairly meaty 38mm size.

A classic Greenfield kickstand was fitted, again to suit the character of the bike and preferences of its owner.

I may have stumbled into a new preference for vintage-style pedals. They're not advertised as any sort of name brand, but when they arrived these inexpensive pedals turned out to be Wellgos. They're definitely a higher quality than some of the other vintage style pedals I've tried, and I expect I'll be buying more of them.

Some inexpensive grips were re-wrapped with some wonderfully ridiculous leopard print bar tape. It's very comfortable, but may be a little too over-the-top. We'll see if it stays.

We had to pick up another sleek little bell like we fitted on the Principessa, of course.

One weird thing about the Torino Dama: It has a 1 1/8" threaded fork. Which means replacing the boat-anchor stock stem is taking some ingenuity. Luckily in the parts bin I had a 1/8" stem shim, a quill stem adapter and a nice modern-type stem. It's a significant upgrade, but I think I'd like to just find a nice 1 1/8 quill stem and not have so many parts in the mix.

Other than those upgrades, though, it's really been about all about deep cleaning, polishing and adjusting.

We'll see when the weather thaws a bit what comes next for this one.